This post is part of an ongoing series on LPE & Social Movements. For the framing pieces, see here and here. 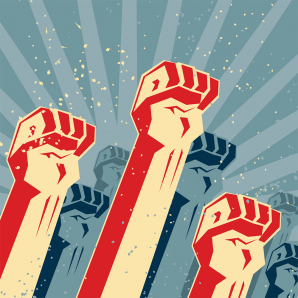 Neoliberalism is in crisis. For the first time in decades, alternatives of both terrifying and exhilarating varieties are on the table. The more democratic and humane alternative will only prevail if well organized social movements directly challenge the ruling class’s material base of power.

What will those movements look like? If history is any guide, they will have to be collectives of people whose everyday suffering can be transformed into relatively short-term campaigns for material betterment, medium-term campaigns for legal reform, and the longer-term work of building solidarity necessary to put truly transformative change on the table. The green shoots in the labor movement, the formations in and around the Movement for Black Lives, and increasingly energetic climate activism, among others, provide some reason for hope. Less discussed has been the possibility of debtor organizing, the subject of an inspiring new report from the Institute on Inequality and Democracy authored by Hannah Appel, Sa Whitley, and Caitlin Klein. The report should be read carefully by LPE sympathizers with an interest in creative practice: potential for legal strategies abound.

The contradictions that led to the current crisis of neoliberalism are the contradictions of governance by finance. Mainstream macroeconomists frequently refer to the neoliberal period as the “Great Moderation”, but these years were also characterized by repeated financial crises. Many neoliberals have understood crises as necessary costs to replacing industrial policy with enabling financiers to buy and sell claims on more and more parts of the world. Doing so was supposed to create a self-correcting system (a more “perfect market”) that could nimbly respond to changed conditions while outsourcing political accountability to the mysterious “market”. The role of the state was to leave economic planning to investment wizards, opening up space to allow them to hedge their own positions using whatever exotic contract structures they deem necessary, fine-tuning central bank operations to keep things humming at the right pace, and jumping in to contain panics with the printing press when things got out of hand. And a system with periodic panics had its advantages: A country (or state) facing a run on its currency or a budget crisis is a country (or state) to which neoliberal policymakers can dictate terms. Labor laws, capital barriers, and other widely supported impediments to financiers’ ability to extract collectively produced wealth can all be more easily swept aside as conditions of liquidity injection.

As Adam Tooze has recently documented in masterful detail, the 2007 crisis was of the sort that was supposed to be no longer possible. It was not just a run-of-the-mill financial panic that could be contained through carefully designed liquidity injections and repression of the rabble in countries on the periphery of empire; it was a public rupture in the central operations of global finance. This was the rupture that has cracked open the political space in which we now operate.

Appel, Whitley, and Klein note that when finance governs, debt becomes a crucial nexus of social control. Household indebtedness continues to reach new peaks every year, with more and more parts of everyday life conditioned on taking on one or another form of financial obligation. When collectively bargained wages and social insurance are replaced by mass indebtedness, social inclusion becomes directly tied up with wealth extraction. And when the workplace is increasingly fractured, people are less likely to share a shop floor than a lender.

This shared condition of indebtedness is widely experienced as isolating and disempowering, but Appel, Whitley, and Klein argue that creative organizing could turn it into a source of solidarity that could strike at the very heart of both the current structure of governance and the dominant form of profit accumulation. Imagine if a debtor’s union had existed as the mortgage bubble burst. What could organized mortgagors (beyond the small group that Dave Dayen documents) have done together, holding the whole economy hostage?

That work would require creative legal analysis, as I myself learned when (I admit!) I worked alongside Appel and Klein at the Debt Collective, testing these ideas out. With only a few of us, mostly volunteers, we won over $1 billion of student debt cancellation (so far) through a combination of direct action and flooding the Department of Education with legal claims that had never been raised before. More lawyers who think democracy must run through confrontation with economic power should be engaging with these possibilities. They are not without limits and complications, beyond even those that Appel, Whitley, and Klein explore. But we can only know how limiting and complicating these are if we begin to engage them. Appel, Whitley, and Klein begin that work, and more of us should take it up.