Darryl Li (@dcli) is Assistant Professor of Anthropology and associate member of the Law School at the University of Chicago.

Darryl Li (@dcli) is Assistant Professor of Anthropology and associate member of the Law School at the University of Chicago.

This post is part of the Law and Settler Colonialism in Palestine Symposium.

Israel has been widely criticized for discriminating against non-Jews. This is unsurprising, given that it is a self-declared state of the Jewish people controlling a territory in which nearly half the inhabitants do not identify as Jews. Hence the accusation of apartheid, long made by Palestinians and their allies and more recently echoed by groups such as B’Tselem and Human Rights Watch and vividly illustrated in the graphic below.

The anti-discrimination framework imagines a situation where authorities unjustifiably favor some categories of its population over others. While this analysis is not wrong, it obscures how Zionism – the political movement for a state for all Jews in the world and Israel’s official ideology – privileges even foreign Jews, to varying extents, over indigenous Palestinians.

The systemic harm here is not merely discrimination; it is one of colonialism. And when we speak of colonialism – and especially settler colonialism, which seeks not only to rule native populations but to replace them – the logic of racial capitalism is seldom far behind.

Israel’s Law of Return invests every Jew in the world with rights to settle in the territory even if they have no personal or family connection to it. New colonists automatically obtain citizenship and enjoy superior access to land, housing, and social services compared to non-Jews – even those who hold Israeli citizenship.

As Israel’s founding prime minister David Ben-Gurion noted, the Law of Return is categorically distinct from immigration law. It expresses one of the movement’s core constitutional commitments, namely that every Jew in the world has a right to settle in the land “by virtue of the fact that he is Jewish … It is not the state which grants the Jews of the diaspora the right to return, this right existed before the state did, and it is that which built the state.”

The shorthand description of Israel as a “Jewish state” misleadingly suggests a country that happens to have a predominantly Jewish population or is governed according to Jewish religious law. But as the title of the 2018 Basic Law confirms, Israel considers itself the state of the Jewish people. Zionism’s commitment to this abstract global category of Jewishness even implicitly negates the indigeneity of Palestine’s historically rooted Jewish communities as a source of rights. Under Article 4 of the Law of Return, such Jews are deemed to have “returned” in the same way as any new colonist arriving today.

Although Zionism inscribes Jewishness in terms of nationality [le’om], it is more usefully thought of as a racial category. It is primarily based on bloodlines but in contrast to jus sanguinis principles that shape many nationality regimes around the world, the Law of Return disclaims any need to trace an individual’s connection to the territory through a family member.This racialized notion of Jewishness functions analogously to whiteness as a formal category in U.S. naturalization law between 1790 and 1952 and especially during the decades when white non-citizens enjoyed superior voting rights and access to land over non-white citizens.[1]

Importantly, Zionism’s racial logic does not exist in a vacuum. It intersects with other forms of racialization that emanate from the West as well as histories of slavery and social differentiation in Palestine. Zionism is partially a response to white supremacy and also deeply influenced by it, as seen in the domination exercised by the European minority within Israel’s Jewish population over Middle Eastern and African Jews. And anti-Blackness in particular renders the place of Ethiopian Jews in Zionism perpetually precarious.

Anti-blackness also affects African asylum seekers and Afro-descended Palestinians in ways refracted by structures of colonial rule: In 2015, a Jewish mob chanting “death to Arabs” murdered an Eritrean asylum seeker whom they mistook for a “terrorist.” They targeted him on the basis of his Blackness, which to them signified Arabness – a hideously “intersectional” lynching.

In Zionism’s racial regime, the mirror image of the Jew is the Arab. Both are categories of abstraction and mobility, but with radically different fates: while any Jew in the world has the right to settle in Palestine, Palestinians are transients for whom any other Arab country is a suitable homeland. Thanks to the mass expulsions of 1948 and 1967, more than half of all Palestinians live outside their historic homeland.

Dispossession of land is the primary means through which the racialization of Arabs produces value for Zionism. Here again, highlighting colonialism rather than discrimination clarifies the terms of Israel’s political economy. Under Israeli rule, public land ownership is the norm rather than the exception; much of the privately-held land is in the hands of Palestinians. This may be confusing to those who primarily view public control as an important way to prevent the accumulation of private power and to facilitate some measure of democratic decision-making about land use.

Public control in this context is connected to a racialized goal of keeping land out of non-Jewish hands, part of a broader apparatus of “Judaizing” the territory. This process has been accomplished through the continuous movement of people and capital from the rest of the world to Palestine, mediated through Zionist institutions that predate the state yet enjoy special status in Israeli law.

The World Zionist Organization uses state funds to build colonies in the West Bank, while the Jewish Agency remains active in encouraging and supporting new colonists. The Jewish National Fund directly owns some 10% of the land under Israeli rule and exercises considerable influence over 73% through its allocated seats on the council of the Israel Land Administration, a state institution.

Meanwhile, the Palestinians who make up half of the total population are permitted legal residence on roughly 15% of the territory. Israel has resorted to a strategy of fragmenting them according to residential zones, each with a corresponding set of rights and privileges. 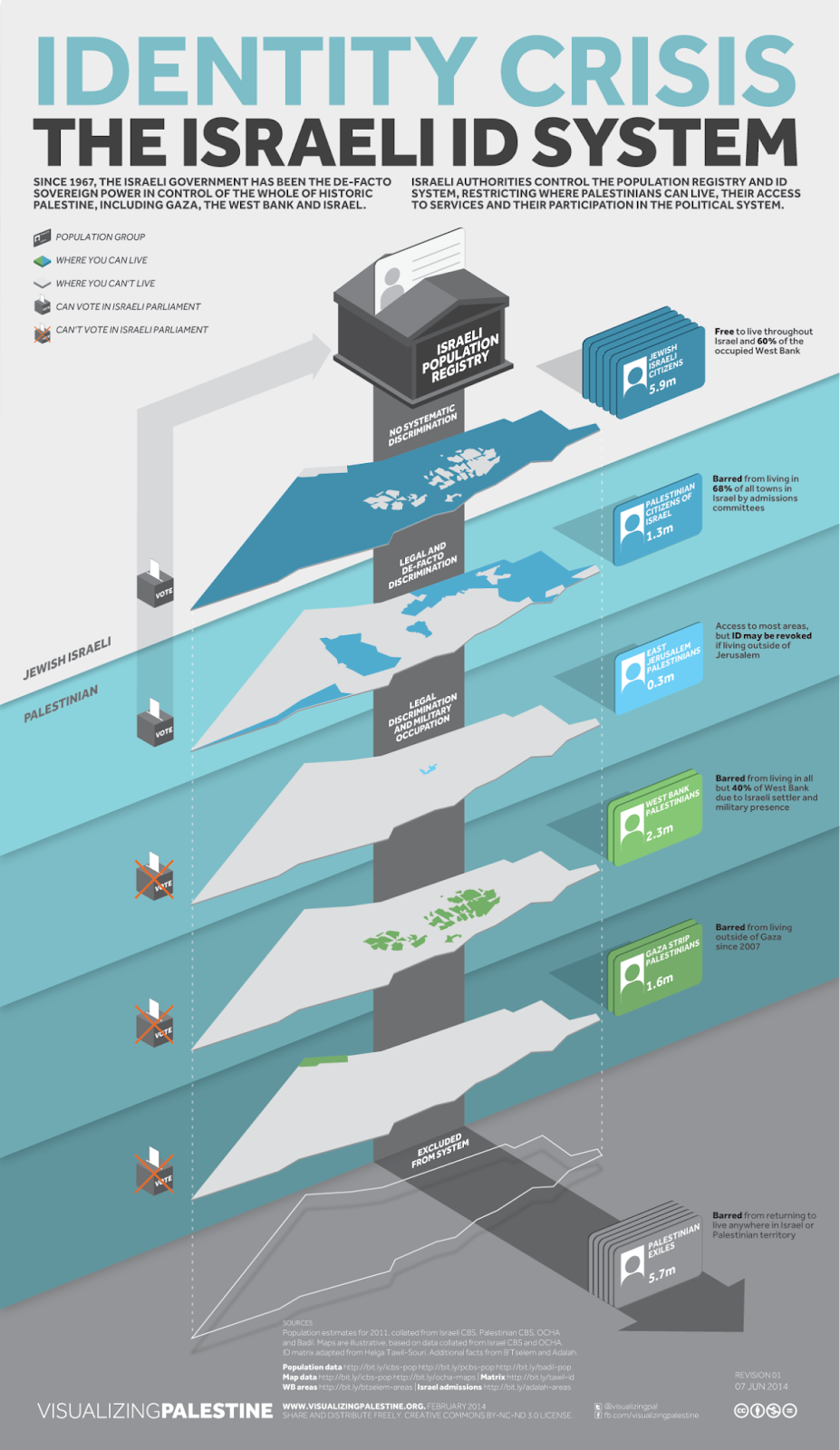 All Palestinians under Israeli rule are subjugated in the Israeli economy in one way or another, but Israel is selective about when it permits Jewish capital to directly employ Palestinian labor. This reflects demographic realities. Zionism has settled enough Jews on the land to avoid the South Africa scenario, where a tiny minority of colonists built an economy based on exploiting native labor. But since the 1967 conquests, the settler population has never achieved the overwhelming numerical superiority that would largely obviate any dependency on indigenous workers, as occurred in Canada and Australia.

The shape of labor exploitation is one decisive factor in shaping how colonial violence is organized and what types of contestation are possible. It was Israel’s dependence on Palestinian workers from Gaza in construction and agriculture that made the first Intifada in the late 1980s particularly effective. In response, Israel gradually replaced Gazan workers with migrants from Romania, Thailand, and elsewhere and hermetically sealed the territory. The occupation accordingly changed shape, trading boots on the ground for economic strangulation and massive bombardment.

Not only did these changes bring about unprecedented destruction and deprivation, they robbed Palestinians of leverage. Classic tactics of popular resistance from the first Intifada like protests, strikes, and refusal to pay taxes could only do so much in the face of an adversary that had little interest in their labor, their money, or their compliance.

Under these conditions, the only way that Palestinians in Gaza have been able to disrupt the status quo and impose costs on Israel has been through developing rudimentary instruments of long-distance violence. Putting aside all of the handwringing pieties about “terrorism” and nonviolence on the one hand as well as the technocratic hairsplitting of law of war debates, this shift from throwing rocks to firing rockets cannot be understood outside the political economy of racial capitalism and its evolving contours of dispossession.

What has been striking about the recent events has been the willingness and ability of Palestinians living under different forms of control to mobilize for each other, and at the same time. The May 18 general strike united Palestinians in all areas of Zionist rule on a scale unprecedented since the 1936 great revolt and demonstrated the potential leverage Palestinians – especially those with Israeli citizenship, who have long been cast as marginal in the national struggle – could exert on the Israeli economy.

Whether Palestinians will be able to overcome this fragmentation through coordinated and sustained forms of action remains to be seen. But Zionism’s ambivalence on the question of native labor is key to understanding the terms of contestation.

[1] Debates over definitions of Jewishness and conversion in Israel are of course deeply fraught and contested, but that does not vitiate the racial character of this ideology; after all, notions of whiteness in U.S. law have been messy as well. Regimes and logics of racialization may be anchored in claims about biology but they are always ultimately social and political. In particular, the “who is a Jew?” question has long been marked by a tension strictly matrilineal definitions under rabbinical law versus blood quantum. After Israel’s High Court of Justice narrowly decided in favor of the latter in the Shalit case, the Knesset papered over this tension with a 1970 amendment to the Law of Return that defined a Jew in terms of matrilineal descent or conversion while at the same time extending the full benefits of that law to anyone with at least one Jewish grandparent (and the spouse of such a person). This opened up an entirely new category of people who have the same rights as Jews for purposes of settlement and citizenship but once inside Israel may not be recognized as Jews for purposes of religious law, affecting issues such as marriage and divorce.